Save Our Nation’s Summer Capital, Inc., is a not-for-profit organization dedicated to preserving Rehoboth Beach, Delaware as a unique resort destination and community with thriving businesses, residences and rental properties all living in harmony.

We are committed to transparency in our local government and informing, engaging and empowering all citizens of Rehoboth Beach.

Who'd ever have thought we'd hear those words and yet the civil rights of the citizens of Rehoboth Beach are being violated as we speak.

The City of Rehoboth Beach has long stood by its 6-month residency requirement stating that it is part of the charter. It has violated the U.S. Constitution the entire time.

For years, the city has disenfranchised certain stakeholders while allowing other stakeholders a vote in municipal elections...or, apparently, multiple votes. The city has also been inconsistent in its delivery of its rules and requirements. Two different people can call City Hall and get two different answers any day of the week. THIS IS NOT HOW IT SHOULD WORK IN AMERICA, PEOPLE.

The government of Rehoboth Beach has been making it more difficult for people to vote in the following ways:

1) By knocking them off the registration list after two consecutive missed elections (without notifying them), so people show up to vote not knowing they cannot;

2) By requiring them to register in person at City Hall;

3) By telling every third person something different when they call City Hall (today the person who answered did not know who the City Solicitor was???);

4) By FLAGRANTLY VIOLATING THE CONSTITUTION OF THE UNITED STATES in myriad ways, including:
a) Holding onto a 6-month residency requirement in direct violation of U.S. Supreme Court rule. Even the City Solicitor understands it to be "Unconstitutional" but ENABLES IT anyway;
b) And thusly, not allowing qualified people their civic right and duty to vote;
c) And lastly, allowing some people to vote multiple times (some as many as 6 TIMES for as few as 3 entities!!! Some pigs are more equal, after all.)

5) Making the absentee voting process difficult and inconsistent. Some have been told they must mail in an affidavit whereas others were not made to do so.

6) It leaves an entire category of people with property in LLCs without the right to vote. We pay taxes, we are stakeholders and yet we are disenfranchised.

And those are just off the TOP OF MY HEAD!! FRIENDS - GET TO THE POLLS ON SATURDAY & DEMAND your RIGHT to VOTE in this municipal election. It's time to take our city back!


Posted by SaveRehoboth at 5:25 PM 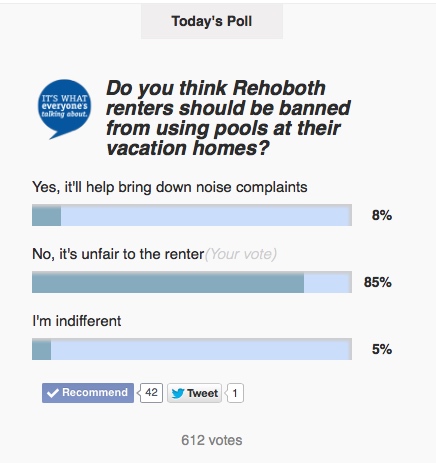 Resident's Call for Mayor to Recuse Himself from Banning Pool Vote

Send an email to
saverehoboth@gmail.com.